Accessions: Diary of Silas E. Parsons of the 147th. NYV He was a ressient of Oswego City and died in the war. A gift of John Tubbs of Seattle, WA

March 19 wed. 6:30 pm the first Oswego Town Historical Society meeting will be held. The topic will be AN EVENING WITH MEDAL OF HONOR WINNER JAMES LEE. The Society calendar of the year will be ready for distribution March 1.

There is a new display in the Town Hall entrance commemorating the 215th .anniversary of the death of President Washington and the 205th. birthday of President Lincoln.

The Arcadia book on the Town of Oswego will be ready for proofreading in May andwill be released in the summer. 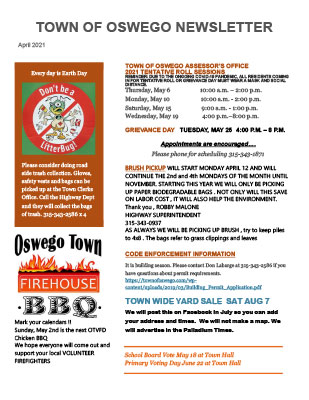